First tournament week of season 2019-2020 has arrived. Björk has since last week been practicing on site in South Africa where the climate is more outdoor friendly than in Sweden right now... Now he is getting the last preparations done together with coach Graham Crisp, until tournament starts on Thursday at Leopard Creek.

Björk is getting prepared for a new season on the European Tour. We took the time to ask Alexander about his visions for 2020, some things about his career so far and personal questions. Read here 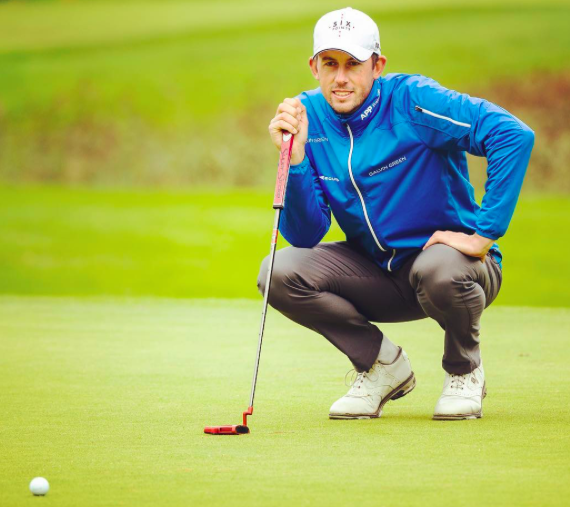 Björk has just been named the best player in the world with his irons in 2018. The top five list includes Henrik Stenson (5), Tiger Woods, (4), Dustin Johnson (3), Justin Thomas (2) and then Alexander Björk (1). 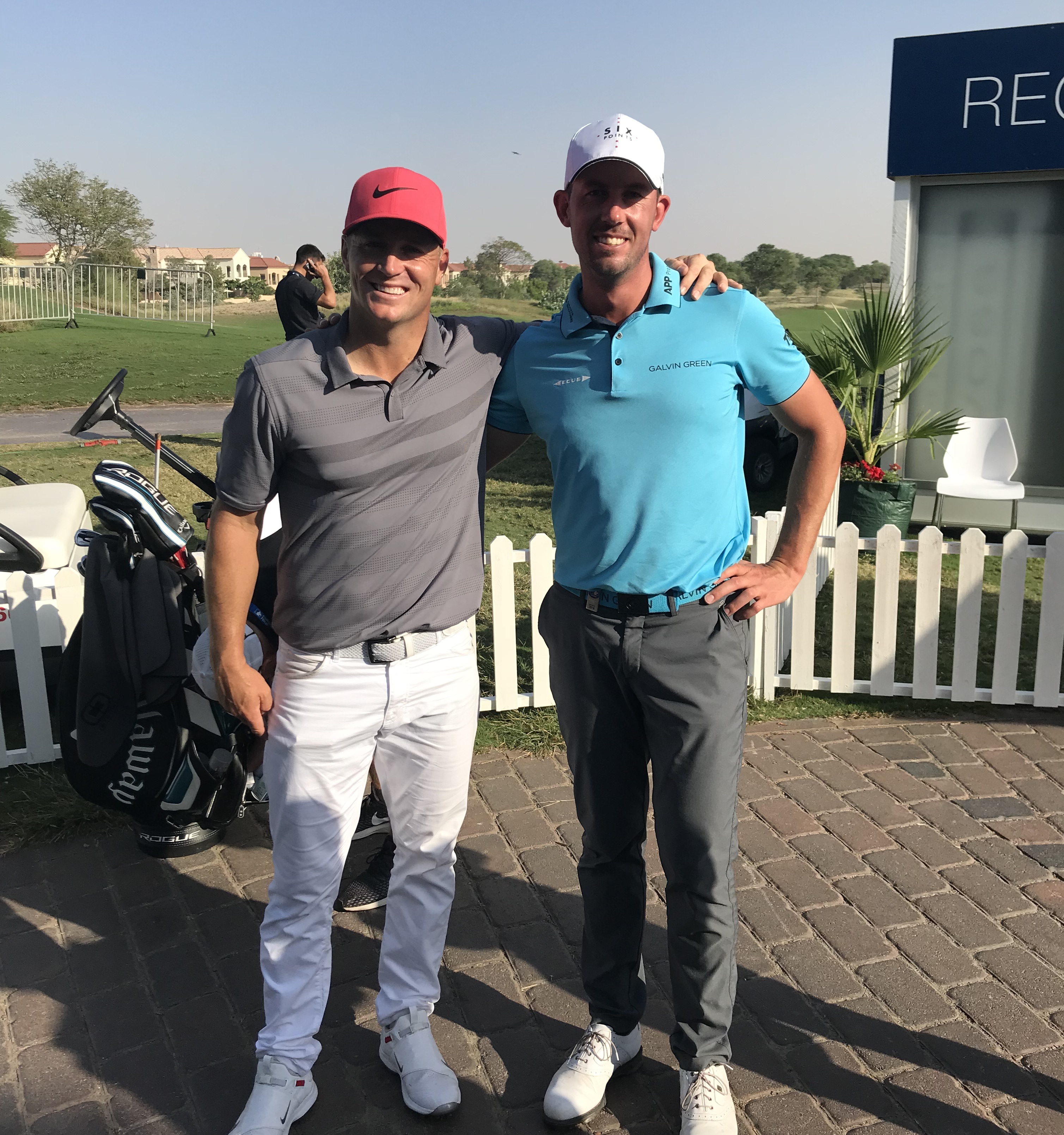 Björk proved that he belongs to the top on the European Tour by finishing 12th in the tour final this year and also finishing 19th on the total Race to Dubai rankings. In Dubai, He scored -11 and played as steady and solid as we have got used to him doing. The 19th spot on the tour rankings is a big improvement since last year when he came 43rd.We are looking forward to what 2019 awaits!

After a week of great play for Björk, it came down to a dramatic finish. Björk and Pepperell battled for the victory to the very end, with Pepperell as final winner nine under par. He played impressive and was at the very top from the first round. Björk advanced from 9th place and played solid during the whole tournament (69,73,68,71). "Couldn’t feel my hands and the body was shaking from cold half of the round. Was great batteling with Eddie and it was close until the very end. A bit disappointed that it didn’t go all the way but proud of how I played." Björk said after the last round. (Photo: Getty Images)
Read about tournament
See final results 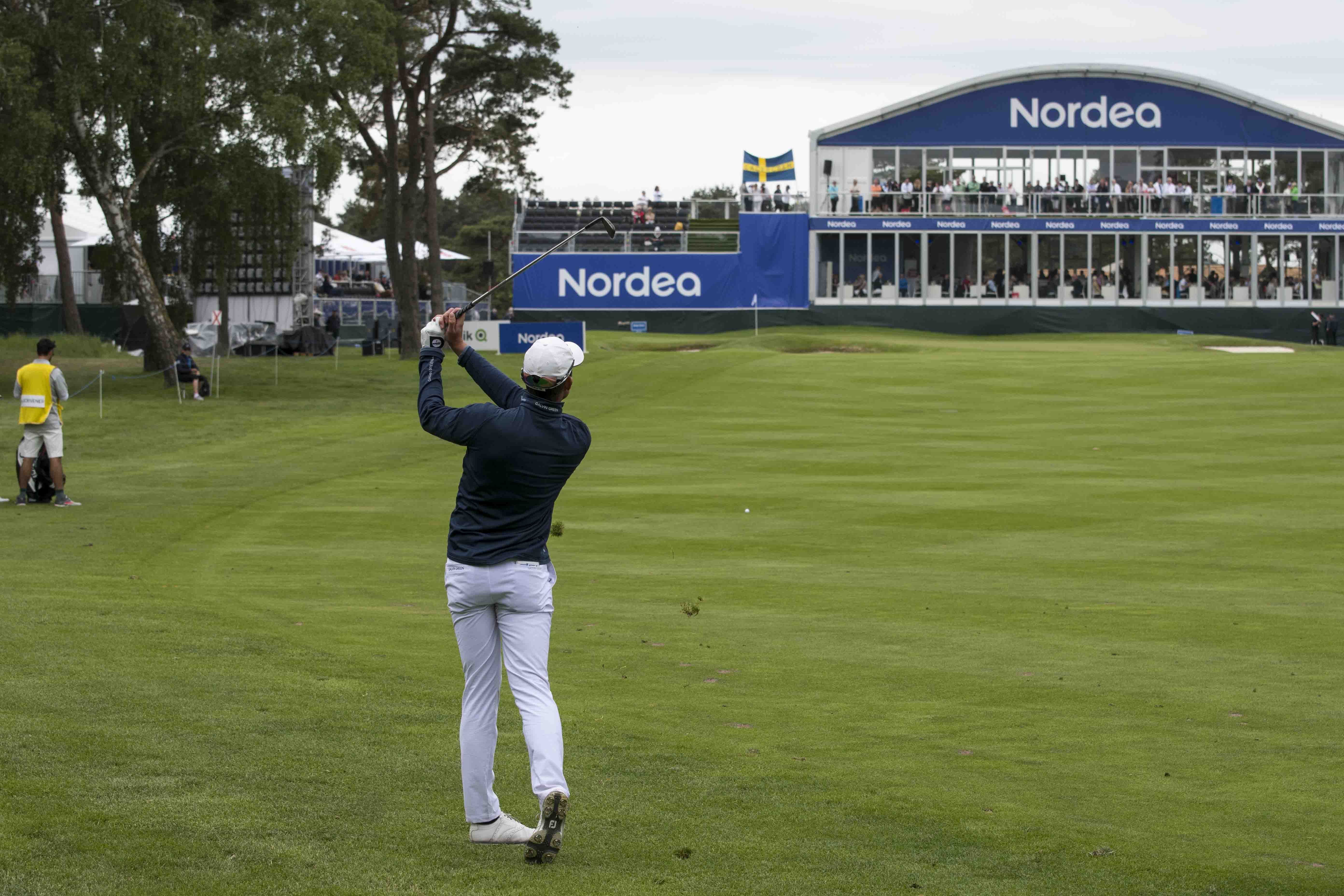 This week it's finally time for the yearly Nordea Masters in Sweden, which means that all of us close to Gothenburg and Hills GC can come out and watch some elit golf. Tee times aren't out yet but can be found on the below link on wednesday. Tickets and general information can be found on this link: https://www.nordeamasters.se/en/ Among the big names, we have Martin Kaymer as former world nr 1. Best ranked swede in the tournament is Alexander as 18th on Race to Dubai.
Read about tournament

This weeks Rolex Event, HNA Open de France at Le Golf National in Paris ended with a new top 10 finish for Bjork, shooting 73,69,68,70 (total -4). This made him advance on Race to Dubai rankings, to current 12 th place. The victory went to another Swede, Alexander Norén (-7). Exciting tournaments are coming up starting already this week with a Rolex event in Ireland, followed by one in Scotland the week after, and then The Open at Carnoustie. Follow here on the website for news from the tournaments.
See leaderboard 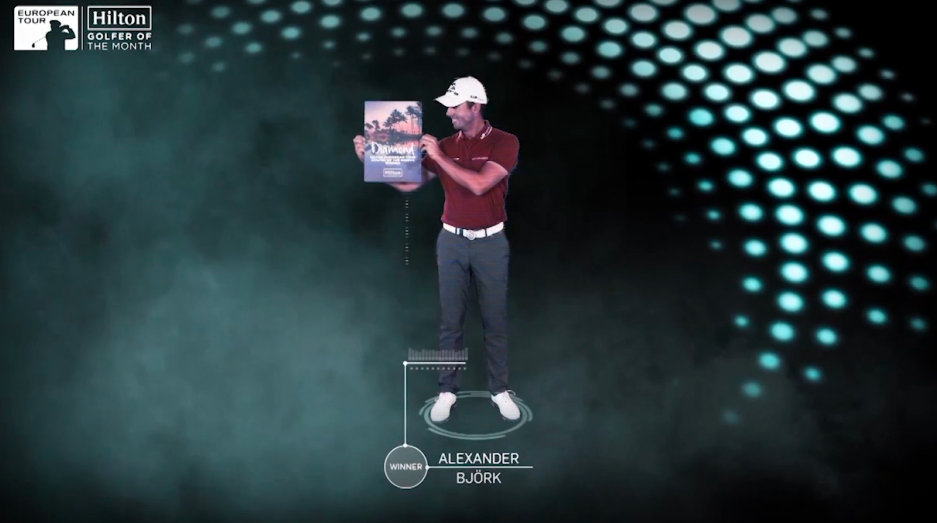 Alexander Björk has been named Hilton Golfer of the Month for April following his win at the Volvo China Open only a week after finishing tied for third at the Trophée Hassan II. The emerging Swede garnered 37 per cent of the fan vote to win the monthly honour, ahead of France’s Alex Levy who took a 30 per cent share of the vote. April was a break out month for Björk, whose best previous finish on the European Tour was a tie for second at the UBS Hong Kong Open earlier this season.
Read more here 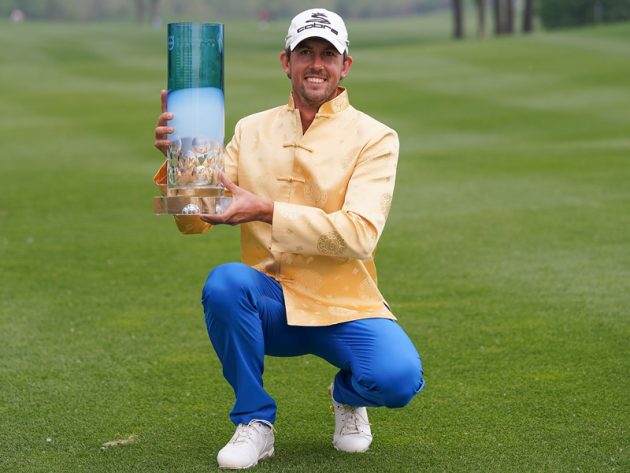 Alexander Björk began the final of the Volvo China Open at Topwin Golf & CC in Beijing a shot off the lead but he came out on top after a fine closing round of 65. England’s Jordan Smith set the pace on Sunday with a brilliant final round of 64. That gave him the lead at 16-under-par with the leaders still out on course. Björk joined Smith at the top of the board with a birdie on the 12th and he moved one clear after a further gain on the 15th. Spaniard’s Jorge Campillo and Adrian Otaegui both reached 17-under to tie Björk but the Swede edged ahead again, reaching 18-under with a birdie on the 17th. He parred the last and was leftto wait and see whether those following could match him...
Read more here 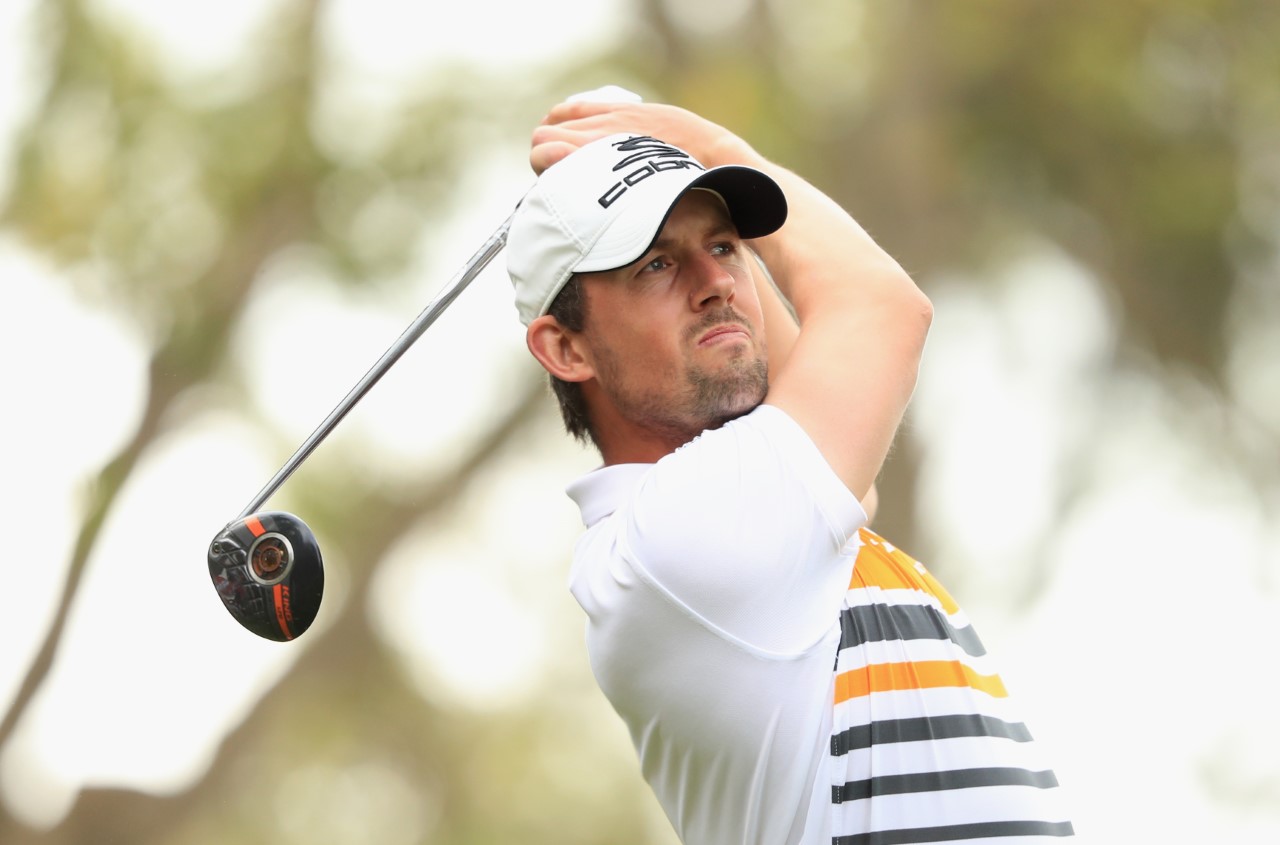 Björk arrived in Beijing off the back of a tie for third at last week's Trophée Hassan II and he made an eagle on the 15th and a birdie on the next, while Englishman Wallace had birdies on the 11th, 12th, 15th, 17th and a bogey on the 16th.
Read more here

It was a tought start for the sweed this week. A 74 (+2) meant 79th place and far away from the top. However, things changed drastically and he came down to 16th place already the next day. During both round 2 (hole 14,15,16) and 3 (hole 11,12,13), he managed to make 3 birdies in a row and that gave him an excellent position heading into the last round. Starting with two straight birdies, the excitement was there, only one shot behind the leader. It was quite even at the top during the hole last round and the winner was Alexander Levy (-8), followed by Alvaro Quiros (-7) and Joakim Lagergren, Alexander Björk, Mikko Ilonen, Andrea Pavan (-6). See full leaderboard 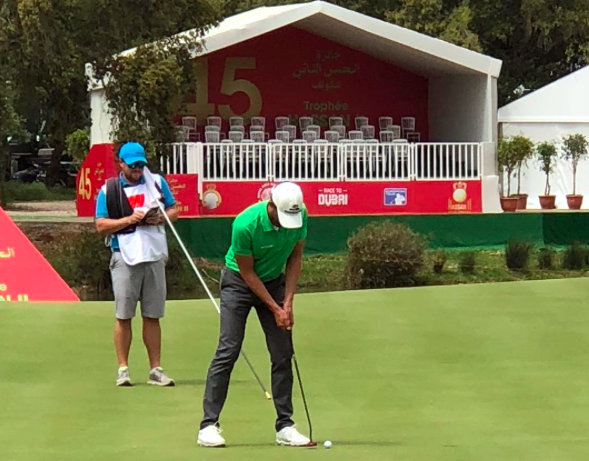 Both Joakim Lagergren (68-73) and Alexander Björk (73-69) have given themselves great startingpoints going into the weekend at Royal Golf Dar Es Salaam. Lagergren who only needed 24 puts the first round, kept playing steady during the second round as well. He mixed bogeys and birdies with a double on the 6th, and finished with a birdie on the 9th hole. He is shared 6th. Björk lost two strokes early, but had a strong comeback with three birdies on the first nine holes and followed up with three straight birdies (14-16) on the last nine holes, for a 69. He is in shared 16th place and had one of the 2nd days best scores on the super tough course. Read swedish article 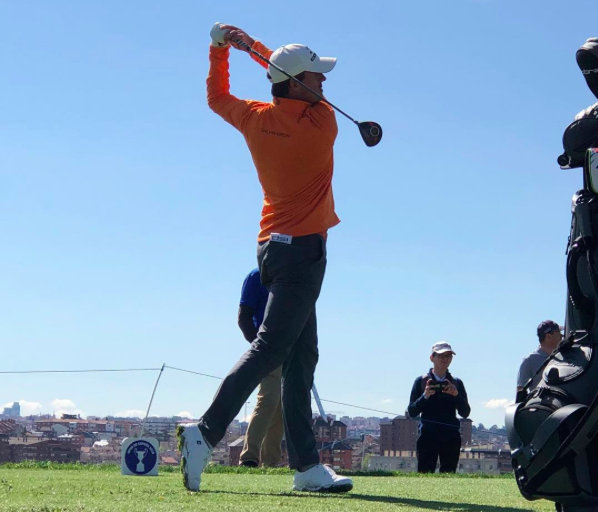 The success rookie from 2017, Alexander Björk, plays this week on the European Tour after a five-week-break. After a very competitive start and 18 played holes at Centro Nacional de Golf in Madrid, he is in shared 3rd spot... Read swedish article 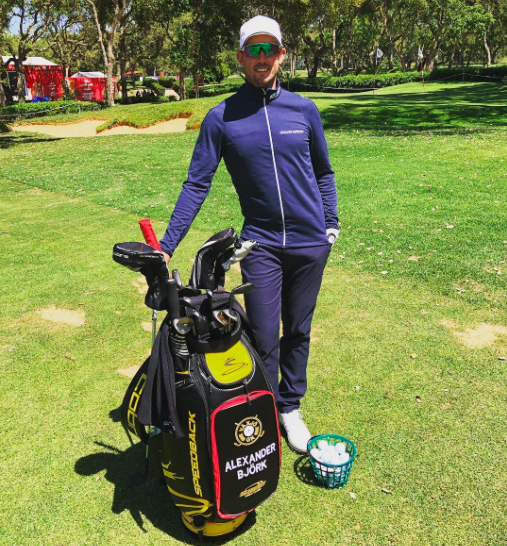 GolfSixes is a special tournament on the European Tour where the countries have two representatives each who will play Greensome matchplay together versus the other teams. The matches are over 6 holes and the tournament will be held in St Albans, England between 6-7th may. Event info and tickets

Alexander Björk made it four top-twenty finishes from just seven European Tour appearances this season as he claimed a T19 finish at the Commercial Bank Qatar Masters this weekend. The Swede’s consistent form continued as he delivered four consecutive back-to-back under-par rounds on his way to another impressive result. Alexander was joined in Doha by fellow MB Partners clients Chris Hanson and Jordan Smith who were looking to replicate their 2017 successes in Qatar, where they finished in T18 and T6 respectively. Read more here 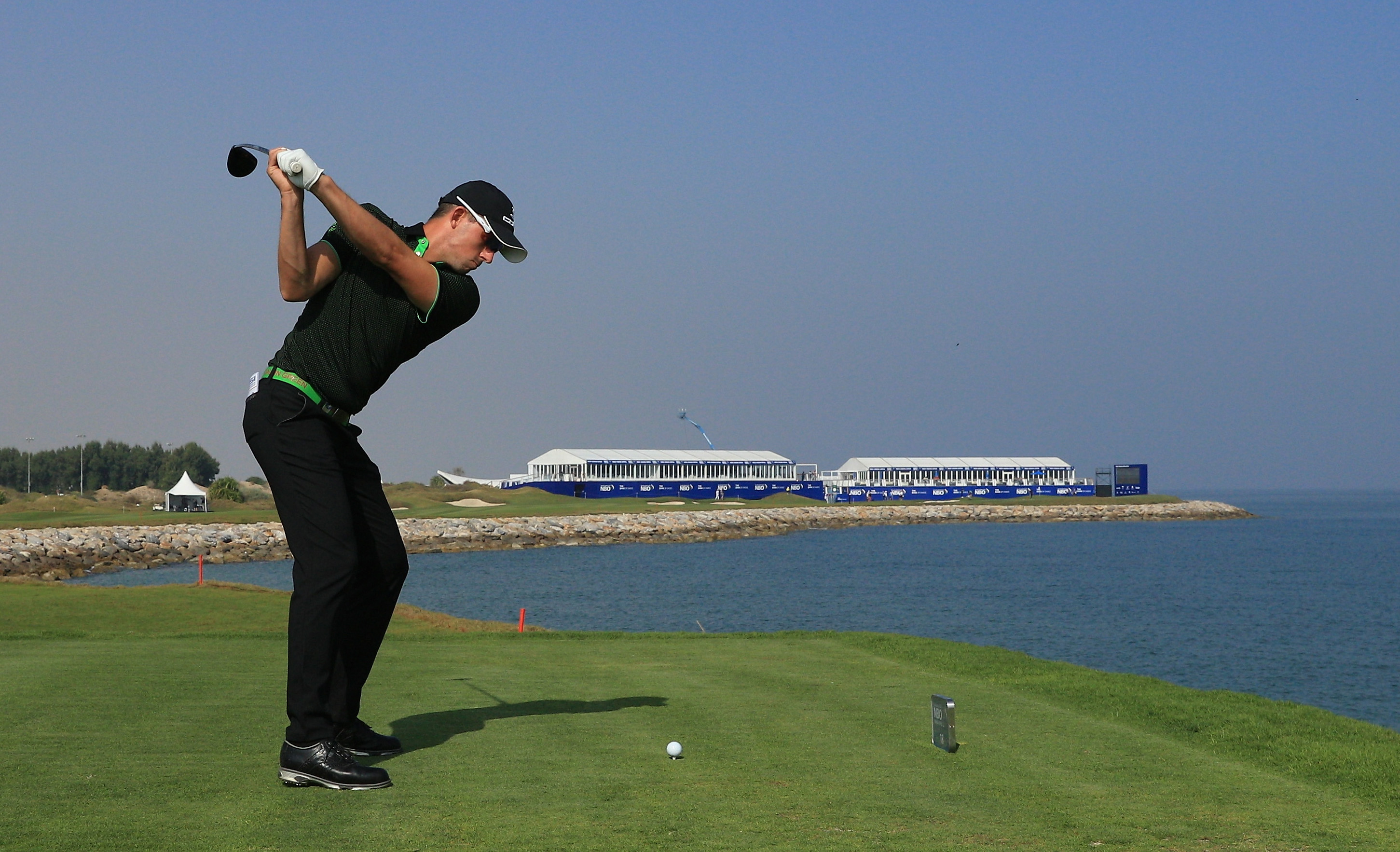 Both Alexander Björk and Jordan Smith delivered impressive performances at the NBO Oman Open this week as they collected T12 and T26 finishes respectively. The pair were joined by Chris Hanson as the MB Partners trio headed to the Al Mouj Golf course as the Middle Eastern nation played host to a European Tour event for the first time. The Aggreko-supported golfer, Jordan Smith, headed to Muscat with fond memories as he returned to the scene of his Challenge Tour Order of Merit triumph back in 2016.... Read more here

It was a week to remember for the MB Partners golfing stable after impressive performances from Chris Hanson and Alexander Björk saw them both finish inside the top ten at the Omega Dubai Desert Classic. Consistently low-scoring saw Alexander trouble the tight end of the leader board all week while Chris enjoyed a memorable final day, as six birdies from his final nine holes saw him catapult up the leaderboard..... Read more here

Judging by the way Alexander Björk played in his rookie season on the European Tour in 2017, you would’ve thought the Swede has been competing at the top level for years. Such was the composure and consistency the 27 year old showed it became very easy to forget that he graduated from the Challenge Tour as recently as 2016. Björk, who finished tied third in overall scoring on the European Tour in 2017 at 112 under par, only missed six cuts all-season, while posting ten top 20 finishes in the process to... Read more here Read more here

MB Partners are delighted to announce the signing of Swedish golfing star, Alexander Björk, on a multi-year management agreement. The 27-year-old joins the company fresh off the back of an excellent breakthrough year on the European Tour where he finished the season placed in 43rd on the Race to Dubai rankings.

An impressive year on the Challenge Tour in 2016 ensured the Swedish talent...
Read more here

Alexander Björk opened up a one-shot lead in the final round of the UBS Hong Kong Open as long-time leader SSP Chawrasia fell victim to the difficult ninth in Fanling. Chawrasia had looked in cruise control but a triple-bogey just before the turn saw him drop out of top spot for the first time since Thursday morning and Björk was in pole position to pounce. The Swede was four under for his first 11 holes to move 12 under, a shot ahead of American Julian Suri and two clear of Chawrasia and Australian Wade Ormsby...
Read more here

Alexander Björk and Wade Ormsby joined SSP Chawrasia at the top of the leaderboard as things tightened up on day three of the UBS Hong Kong Open. Indian Chawrasia held a two-shot lead coming into the weekend and extended that to three in the early stages before being reeled in by Swede Björk and Australian Ormsby at nine under. Newly-crowned Race to Dubai Champion Tommy Fleetwood and Spaniard Rafa Cabrera Bello were then at eight under at Hong Kong Golf Club, a shot clear of English pair Chris Hanson and Justin Rose...
Read more here